Kazy is a delicious filled horse meat, popular in Kazakhstan. Learn how to make this tasty food in 3 simple steps. 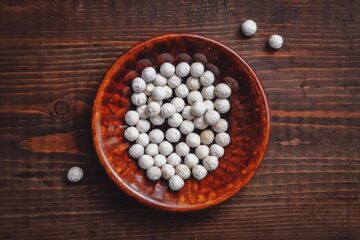 Learn how to make Kazakh Kurt, a delicious fermented milk product that is nutritious at home in six simple steps. 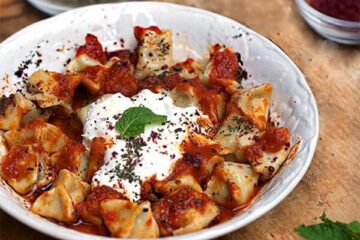 Manti is a popular dumpling found in many Turkic cuisines and the cuisines of the South Caucasus and Balkans, Central Asia, Afghanistan, and Chinese Muslims. 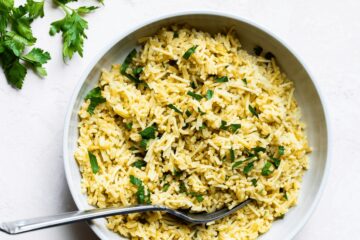 rice pilaf is Kazakh white rice cooked with oil and chopped onion and simmered with broth. follow this recipe to have a fantastic rice pilaf! 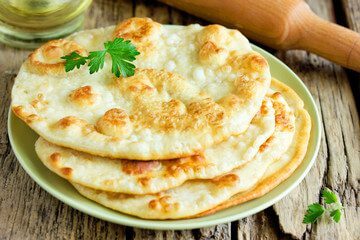 Shelpek is Kazakhstan flatbread, and it is popular in central Asia. Shelpek is fried dough made from flour, milk, sugar, salt, and yeast. 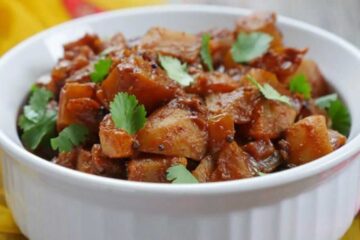 Shalgam or turnip is a vegetable from the radish family. It is the best choice for cold weather. Shalgam Ki Sabzi or turnip curry is essential for northern Indian families. 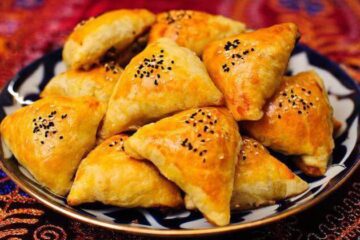 Samsa is a yummy savory pastry that is seen greatly in the central Asian cuisines a lot. Samsa is known to be representing a bun that is stuffed with meat or vegetables. 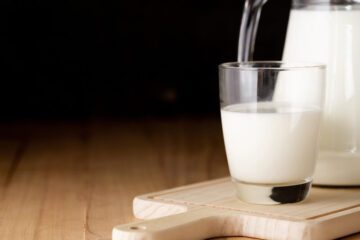 Everything About Kumis | Kazakh National Drink

Mongolian kumis is known to be a drink that has been made by a fermented dairy product. It is simply made from the mare’s milk and sometimes donkey’s milk. 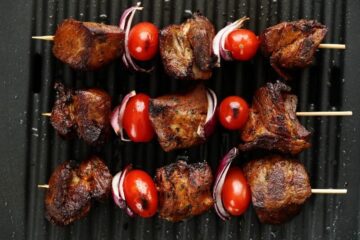 Shashlik is a suitable picnic food. This delicious shesh kebab is mostly lamb, but pork, beef, chicken, and other types of red meat can be used too. 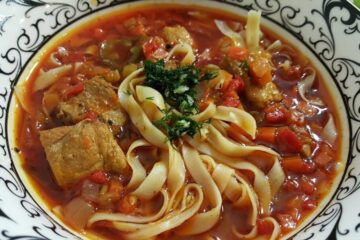 Lagman is a hearty soup full of different nutritious vegetables, served with noodles and aromatic broth. It is one of the traditional dishes of Uzbekistan and other central Asian countries. 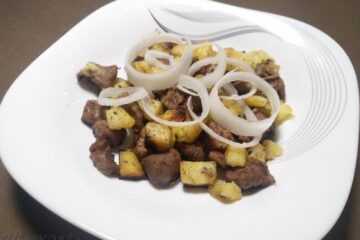 Kuurdak is a traditional food in Kyrgyzstan, and also served in other central Asian countries. This food is straightforward and fast to cook. Kuurdak is made of fried meat, onion, garlic, and potatoes. 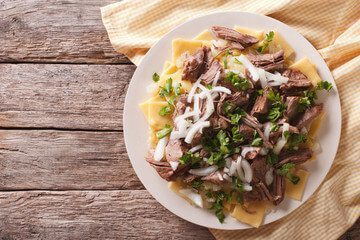 Beshbarmak is probably the most popular Kazakh dish. This delicious food is made from boiled meat, onion, and noodles. 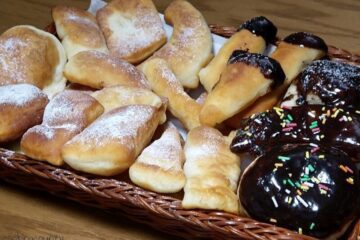 Baursak or Boortsog is fried dough. This amazing Kazakh food has two uses. It can be bread and also it is a popular sweet like a donut. Baursak is a very easy and fast dessert.

Their lifestyle has had a significant impact on their cooking style, and its signs can still be seen today. One of these approaches is to prepare food for a relatively long time, leading to its maturity. The most common traditional way of cooking meat in Kazakhstan is to boil it. Horse and camel meat is mainly consumed in some special ceremonies. There is also a lot of delicious homemade bread in Kazakhstan. It is good to know that bread has special respect among Cossacks. It is good to know that Russia, Turkey, and China heavily influenced Kazakh cuisine.

The following are some of the most popular Kazakhstan main course recipes:

Beshbarmak, the National food of Kazakhstan

The national dish of Kazakhstan is Beshbarmak (also spelled as Beshparmak) means “five fingers.” People chose this name because it is usually eaten by hand, with five fingers. It consists of boiled horse meat and noodles. The noodles are typically handmade, with a dough made from flour, eggs, and salt. The meat is cooked in water with onions, carrots, and garlic.

– In some regions of Kazakhstan, it is also common to add potatoes to the dish. Beshbarmak is a delicious and nutritious food that is very popular among tourists.

Kazakh pilaf is a food that is often prepared with lamb, and along with it, some onions, carrots, and even apricot leaves are used; finally, some sheep fat is added to it to create a better taste. The basis of eating this food is by hand, but people also use a spoon and fork, depending on the hygiene tips.

Kazi is a popular Kazakh food made from horse meat. Horse meat is hung for 5 to 7 hours to drain the blood, and at the same time, its intestines are cleaned and soaked in saltwater for 2 hours. Then they salt the meat, add pepper and garlic and leave for 2 hours to get seasoned. Then they fill the intestines with flavored meat, close the top and bottom, and fry or grill it. Cossacks sometimes keep this food until Nowruz. Kazy should be boiled in a large pot for 3 hours.

Manti is a flour dough containing meat and fragrant vegetables that has a magical taste and often uses a variety of sauces with garlic, onion, sour, etc., and some butter. Kazakh chefs use minced horse or mutton to prepare and cook this dish, and they do not fry it at all. They steam the inside ingredients for hours to make the Manti not have a raw taste.

Laghman is a delicious and popular Kasakh food. The ingredients are thick noodles, beef, tomatoes, carrots, and potatoes, usually served boiled. You can find this type of food in many restaurants in Kazakhstan, and their menu list is trendy among people and even tourists.

One of the delicious foods of Kazakhstan is called “Kuurdak,” which consists of meat, liver, heart, offal, and onions. Some people in this country also cook kuurdak by adding potatoes, spices, and carrots.

Baursak is a traditional bread in Kazakhstan and neighboring countries, which is very popular among the people of Kazakhstan and even tourists. Cossacks first prepare the dough in a round shape and then fry it in oil to prepare this bread. The dough of this bread is made from a combination of liquid yeast dough, milk, flour, sugar, and salt. It is used between snacks and even during the main courses, which is also very tasty.

Kazakhstan is known for its desserts. There are many different types of dessert recipes that are popular in this country, and each region has their own favorite desserts. After a delicious meal, drinking tea is pleasant. Tea in Kazakhstan is never limited to drinking it alone; sweets, nuts and dried fruits are always served with it.

shak-shak (shek-shek) is the most popular Kazakh dessert. Squares of dough are fried in boiling oil and then mixed with honey to form a sticky mass, which is then topped with raisins and walnuts.

Another Kasakh dessert is called Zhent, a dessert which is made from millet, sugar, crushed cottage cheese, butter and raisins. Zhent is usually prepared for holidays or special occasions.

The interest and dependence on milk and various dairy products in Central Asia and the Caucasus have long been a prominent food habit of the people of these regions. Although cow’s milk is the most consumed in daily consumption among Cossacks, one of the traditional dairy products of this country is horse milk, which is used both in pure form and buttermilk.

Today, in some places, you can see ice cream stalls that make a variety of fruit and chocolate ice cream using horse or camel milk. In Kazakhstan, butterfat is made from the milk of cows, buffaloes, goats, and sheep. Sometimes the taste of Kazakh butterfat is slightly sour, which is a traditional approach in this country, and it is used in various ways, for example, to decorate some types of soups and slices.

A fatty drink derived from sour camel milk, Shubat. It is mildly intoxicating and should not be consumed in large quantities. Shubat is prepared in special leather, wood or ceramic containers, and if it has been left sitting for 2-3 days, it is the most delicious. In South Kazakhstan shubat is called Kymyran and in East Kazakhstan, tuye Kymyz, kumis  (camel kumys.)

Another popular tradition in this country is a type of curd called “Kurt.” To make this type of curd, made from cream and sour milk, Kazakh women chose shady places with enough air and wind. In this case, the Kurt that was prepared would have better quality. The Cossacks sometimes rubbed butter on the Kurt and served it with tea. In addition to the above, several types of traditional cheese and yogurt are common in Kazakhstan, most of which have their roots in the livestock life of the people of this land throughout history.