Basturma is a traditional Armenian cured meat made of beef or lamb. The heart is first marinated in a mixture of spices; then air-dried for several weeks. Basturma has a very intense flavor and is often used as an ingredient in stews or dishes with rice. This Basturma recipe includes all the traditional spices and step-by-step instructions for curing the meat. Join Cooking County with the recipe of Basturma.

What do you know about the History of Basturma?

Basturma is a cured, air-dried beef from the Armenian city of Yerevan. The dish is made by marinating beef in a mixture of spices and then drying it for several weeks.

Basturma’s history dates back to the Armenian Kingdom of Cilicia, which existed from the 12th to 14th centuries. During this time, the Armenian people developed a method of curing meats similar to the European process. However, the Armenians added their unique spices to the mix, which gave Basturma its distinctive flavor.

Basturma became popular in Armenia and other parts of the Ottoman Empire during the 16th century. It was often eaten as a snack or appetizer and used as a flavoring for stews and sauces.

How to Make Basturma?

As we said before, Basturma is meat processed and dried uniquely. So, wash the beef and divide it into 4 equal parts, each 30 cm long, 12 cm wide, and 6 cm thick.

Mix the cumin with lukewarm water, then gradually drain the water and add the chili pepper, ground coriander seed, cumin and red pepper. Put a lid on the finished mixture bowl in the refrigerator.

Leave it overnight in the refrigerator. The next day, we apply the mixture on the pieces of meat, smooth the surface with wet hands and hang the Basturma to dry for 10-12 days in a well-ventilated place.

Note: Some people marinate the beef in a mixture of garlic, salt, pepper, cumin, and paprika for 24 hours. So, marinating the beef depends on you.

How to Serve Basturma?

When Basturma is ready to serve, it is thinly sliced and often served as an appetizer with pita bread or crackers. It is also used as an ingredient in stews or other dishes. If you are cooking with it, add it to the dish in the last few minutes of cooking so that it doesn’t toughen up.

How much time does Basturma need to get ready?

Basturma takes a few weeks to get ready.

How do I make Basturma?

This Basturma recipe will give you this Armenian specialty’s authentic flavor. The beef is marinated in a combination of spices, including cumin, paprika, pepper, coriander, and garlic, then air-dried for several days. 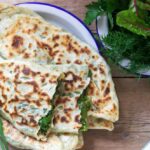